The Pipavav Coast Guard of Amreli suppresses a gang stealing from the ship.

The Pipavav Coast Guard of Amreli suppresses a gang stealing from the ship. 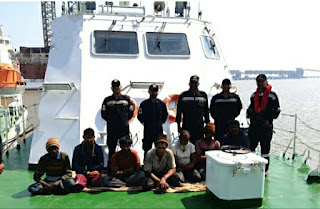 All the accused came out of the new port.And the accused was supposed to try to steal in a ship called Almarajo but failed.A mega operation was carried out in the sea today by the Pipavav Coast Guard, operating in the Pipavav port of Rajula in Amreli district. In which the gang is stolen from the ship.Today, the gang intends to steal the ship in the Almarajo ship at the Alang Shipyard. And after stealing it and leaving the same area before reaching the Pipavav Coastguard, these 9 isms and their boat have been smashed.The details of all these accused are as follows.(1) Sapla Iqbalhusam(R) Belim Osambhai Umarbhai(3) Chauhan Imran Osman(4) Baraiya BalooGabharu (P) Chauhan Abderman Jusab(6) Sumra Salim Ali(7) Manga Vira Bambaniya(8) Osman Jusab Chauhan(9) Mohammad HusseinAll the theft accused have been revealed to be residents of Nawabandar.All the accused are being brought to the Marine Police by the Pipavav Coast Guard for bringing the Pipavav JTA.Pipavav Coast Guard and Marine Police have begun operation. A gang stealing from the ship has been arrested while speeding up the nine accused.The Pipavav Coast Guard has achieved significant success with these procedures. Also, a boat named Kirmani was seized by the Coast Guard and Marine Police. The PSO is currently under investigation at Marine Police Station. It is stated.

Patriciahttp://quitewish.com
Patricia a expert content creator and SEO expert having Proven record of excellent writing demonstrated in a professional portfolio Impeccable grasp of the English language, including press releases and current trends in slang and details.
Previous articleFind out who arrested the accused while fleeing in Amreli city rape and Paxo crime.
Next articleFind out how to arrest the accused in the Duffer gang case from the Amreli and the accused in the gang.