Know who was elected in the election of the Gujkomassol Chairman Vice Chairman held today?

Know who was elected in the election of the Gujkomassol Chairman Vice Chairman held today? 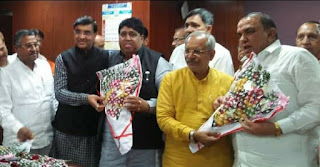 The election of Ahmedabad Head Office Gujkomasol Chairman and Vice Chairman was held today.
This election was held today at the Ahmedabad Head Office under the chairmanship of the Collector, in which Honorable Shri Dilipbhai Sanghi was elected as the Chairman while Mr. Govindbhai Parmar was elected as the Vice Chairman.
At this time, the BJP general secretary of the region, KVK. C. Patel, along with regional BJP spokesperson Shri Bharatbhai Pandya, greeted several co-operative leaders and saluted their mouths.

Patriciahttp://quitewish.com
Patricia a expert content creator and SEO expert having Proven record of excellent writing demonstrated in a professional portfolio Impeccable grasp of the English language, including press releases and current trends in slang and details.
Previous articleWhat is going on Find out whose fury was spread among the people who were breaking the image!
Next articleKnow who is the Chairman of the Non Reserve Class Commission of the state of Gujarat? And why visit the complex?