Find out what was the secret of the body of a young man found on the banks of the river Amreli?

Find out what was the secret of the body of a young man found on the banks of the river Amreli? 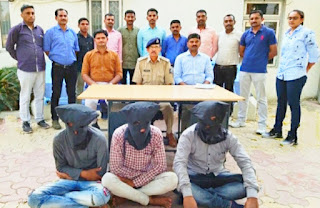 The young man was given alcohol information to Rajkot police for this reason. The offender, who was a resident of Rajkot, Amreli and Shelakhalaya, reported crimes against the young man.The SOGA has arrested the accused in the unidentified crime of the brutal murder of a Porbandar youth at midnight in Amreli city.According to the information available, the deceased Mayurbhai Dineshbhai Sakariya had come to Amreli for some work and an unknown person was severely injured on the head, on the sitting side and on the portions of a weapon near a Juma mosque in Amreli city. Due to this he was referred to Civil Hospital of Amreli and more at Rajkot for further treatment and died during treatment. Following this, the unidentified person registered a crime against the unidentified person at City Poste. Was done.Amreli police chief Nirpilit Rai said the crime of murder was undetectable, so he was deeply involved in the crime while Amreli SOG was detained for detecting serious crimes like murder. Po. KD Jadeja and Po. Sub ins Mahesh Mori and SOG Given the necessary instructions and guidance to the team, different teams of Amreli LCB, SOG, Parole furlough squad and Amreli city police were investigated.The deceased was found dead in a critically injured area in the Juma Masjid area near the Amreli Thabe river, so that all CCTVs in the area around it were found. Procedures were taken to obtain the footage and an inquiry was conducted on suspected laborers and intensive efforts were made to locate the unidentified accused.During the investigation, personal intelligence and technological equipment revealed that the three suspected ISMOs involved in the crime will be heading to Rajkot from Shekhambhaliya on their way to Rajkot. On receiving such precise information, a watch was set up near the village on the way to Dhargani village on the way to Rajkot, from the Shell Khambhaliya of the taluka, and when all three Ismoes were about to escape on their own Ektiva, all three Ismunds approached them and asked. , Killed by pipes and glass bottles, murdered, leaving his corpse in an unsavory area Had given a confession.The details of the accused are as follows.(2) Murtuza alias Bilal Sikandar Rawada (UR 4), Business: Salesman, Living. Rajkot,(1) Sameerasha alias Samlo Sultanasha Pathan (A3), Occupation: Driving, Living. Amreli Mini Kasbawad in front of colored pan(2) Anandubhai Aspabhai Vala (U. 3) Occupation: farming, living. Shellachaya, Ta. Guess detained

Patriciahttp://quitewish.com
Patricia a expert content creator and SEO expert having Proven record of excellent writing demonstrated in a professional portfolio Impeccable grasp of the English language, including press releases and current trends in slang and details.
Previous articleFind out how to arrest the accused in the Duffer gang case from the Amreli and the accused in the gang.
Next articleWill the opposition leader Paresh Dhanani take over in the coming days?