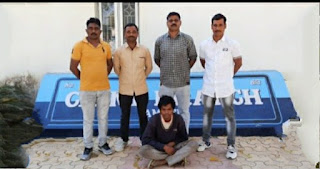 The accused was arrested while fleeing in the crime of murder in the murder case of Phadhari Posti in Rajkot rural district.Amreli police chief Lalipat Rai has been given the above information necessary to the Amreli district police system to get information about the accused and to arrest them and take appropriate action against them. PN Mori and RK Karamata and LCB Team Rajkot Rural Curtain Post. FGN 1 / 2R EPCO The accused has been successful in apprehending the accused from the small bus station in Amreli while under the guise of Article 1, 2A (B), 3.Kailash Maganbhai Mavi, a resident of Khakhrabella village of Padhdari and planting a farm, was killed by the Kailash’s wife Raju Nehru Mahida and Banvi’s brother. Happened on the 5th.On the flight of the incident, it was reported that the accused Raju was working with Tankara with his family while the deceased had come to Khakharabella from Phadhari, five months ago, from his hometown of Madhya Pradesh and planted land in a large part of the area. Kailash’s brother-in-law Raju and his brother Kazu both came to Kailash’s house on the night of the incident and had Kailash there. Later, all three wards had left home to ask for sleep. Early in the morning, Kailash’s brother-in-law Raju and his brother Kaju came to Kailash’s room and demanded rugs for the deceased’s wife, who was feeling cold. When Kailash’s wife asked about her husband, the two brothers went out with a mattress saying that the house was asleep. Kailash Maganbhai was found dead in the morning while her husband did not come home to investigate the house. Police suspect that the finger and nails were found on the deceased’s throat.According to the complaint of Savitaben Kailashbhai Mavi, wife of the deceased, who was also causing death by PM in the PM of the deceased person. The search for the two accused was launched.The arrested accused Raju alias Rakesh Naharubhai Mahida, age 9, resided. Curry has been handed over to Amreli City Police Station for further investigation.

Patriciahttp://quitewish.com
Patricia a expert content creator and SEO expert having Proven record of excellent writing demonstrated in a professional portfolio Impeccable grasp of the English language, including press releases and current trends in slang and details.
Previous articleKnow who is the Chairman of the Non Reserve Class Commission of the state of Gujarat? And why visit the complex?
Next articleFind out where Amrelima was arrested for allegedly cheating two women by wearing her clothes.