Amreli District Superintendent of Police, Rai Saheb has taken up a new campaign to celebrate the Holi-Ghuleti festival in Amreli district.

Amreli District Superintendent of Police, Rai Saheb has taken up a new campaign to celebrate the Holi-Ghuleti festival in Amreli district. 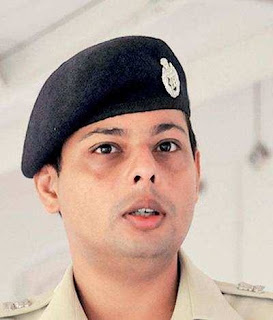 In Amreli district, now the police are seen to be active while taking a strict stance against the anti-social elements and taking action against them. Is, the evil of celebrating religious festivals with the use of alcoholic beverages. Vyasanio of the apanavatam and steal from others the amount to be raised by a disadvantage to their economic advantages such evil practice Caste than anti-social activities, such as alcohol, gamblingIn order to prevent any such antisocial elements from succeeding in their evil intentions, the Amreli district police has made intensive advance planning for all highways entering the district such as Kotadpitha, Chawand, Hindoran, Tumbi Vs. Vehicle checking is made more intensive at check posts as round-the-clock campaigns are handy and day-to-day intensive patrols are organized.A special drive has been organized in Amreli district to detect such cases as part of the liquor gambling campaign, and a continuous watch has been set up on the anti-social elements of alcoholic gambling activities.Amreli district has intensive patrolling to cover all the major roads in Amravati district. No, it’s not.

Patriciahttp://quitewish.com
Patricia a expert content creator and SEO expert having Proven record of excellent writing demonstrated in a professional portfolio Impeccable grasp of the English language, including press releases and current trends in slang and details.
Previous articleFind out what steps the health system advises to avoid the virus while knocking on the door of Corona virus Amreli.
Next articleFind out how many crore budgets have been approved in the general meeting of Bagsara Municipality for 2-3 years.